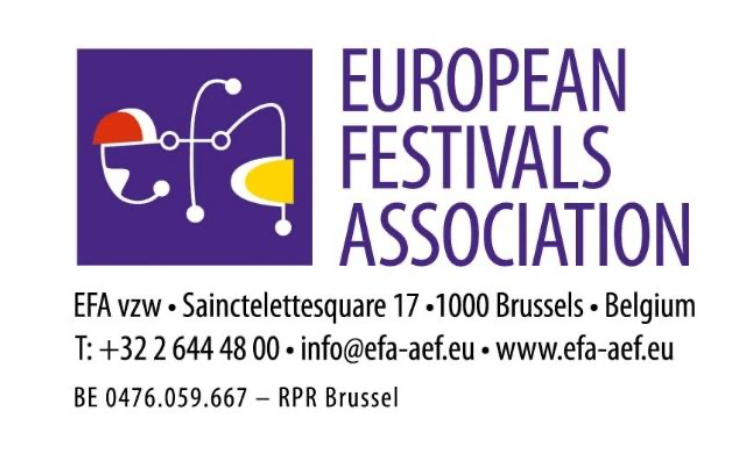 European Festivals Association (EFA) in support of the arts

The Association’s mission is to contribute to the artistic life of Europe uniting and representing its member festivals across Europe and the world. It acts as the most important platform for arts festivals. EFA members take the joint responsibility that the arts are prioritised offering their platforms to bring the arts to the audiences.

Access and participation in culture and the arts is a Human Right. By supporting and enabling artistic creation, production and participation, EFA and its members ensure that this right is made a reality for all citizens. Interaction between festivals, with public authorities and the other stakeholders in the arts are central to EFA's work.

A Festival is an Art Feast. EFA is a community dedicated to the arts, the artists, and audiences. EFA’s main role in the ever changing world of digitization and globalization is to connect festival makers so to inform, inspire and enrich the festival landscape.

In this perspective, EFA is a festivals’ service provider; the oldest cultural network of European festivals! It was established to bridge the distance between organisations and all kinds of this of stakeholders; and to create connections. All this in function of the enrichment of a festival’s own artistic offer and its organisational opportunities.

EFA is becoming a “We” story, linking people and organisations active in the arts management field. It is a story that is reaching beyond Europe as it strives to

consolidate interaction between continents, countries and cultures so that there can be mutual inspiration, influence and confrontation. The content of EFA is changing, developing, evolving constantly to be an organisation of its time.

Art is fundamental to human beings, and to our community-building processes. The beauty and meaning, exaltation and opposition that are intrinsic to art make it a potentially healing industry that demands our commitment. EFA guides the discourse on the value of arts festivals.

Poland is offering one of the most important contemporary arts contributions as well as an immense cultural heritage. In Poland and its cities and villages, we find one of Europe’s major, most important artistic and cultural players.

The European Festivals Association, through the Wratislavia Cantans Festival, The Shakespeare Festival Gdansk, the Ludwig van Beethoven Festival Warsaw as well as the Divine Comedy Festival in Krakow and through many other festivals and their directors, have a strong connection to the arts and cultural life in Poland and to the Juliusz Słowacki Theatre in Kraków.

The freedom of creation, of production, and of circulation of the arts and artistic goods and players enables festivals all over Europe to benefit from Polish arts. The work of leaders of festivals and arts institutions plays an important role in this context. And the relation between the arts venues and festivals and their political stakeholders. In this context, we are developing together with the City of Krakow the Festival Cities Initiative offering a continual platform of dialogue between the arts community and their local stakeholders: this dialogue leads to a strong alliance between arts and politics to discuss joint strategies for common challenges in this world.

We would like to appeal to you, the Marshal of the Malopolska Region and the Regional Assembly calling for a dialogue aimed at completing the mission of the current management in the theater.

Rumors reaching Brussels about a break in cooperation with the current management due to an alleged 'vulgarization' of the stage and ‘exposing it to loss of good name’ are unbelievable. Theater often uses radical means of expression, and Krakow, the city of Warlikowski, Lupa, Wyspianski and Kantor, has always been a stage of very radical gestures, building the history of European theater.

The appeal is for the freedom of creation, freedom of artistic expression and respect for the theater's artistic autonomy to be maintained and for the current director's contract to be carried out in accordance with the assumptions of his mission. From EFA's perspective, the substantive independence of cultural institutions is one of the most fundamental principles of a vibrant European theater community, of which Slowacki Theatre is an important part.

The European Festivals Association and its members express their continued support to the values the Association expresses for 70 years, regrets the situation at the Juliusz Słowacki Theatre and stays in touch with Polish arts in the coming years.